Two Roads in a Cyber Forest

Note: This is a longer post than normal, but if you are here looking for advice on setting up a working desktop on stock FreeBSD, read on.

A few weeks ago, the developers at Project Trident, the excellent BSD desktop featuring the Lumina window manager, decided to move to another operating system platform. They made the decision for a variety of reasons that I won’t recount here. The new OS base will be Void Linux, notably called the most BSD-like of the Linux versions they surveyed.

On the one hand, I’m happy to see project make progress- there will be a lot more development on the project and there will be a new suite of capabilities that unfortunately have not made it into FreeBSD and downstream to TrueOS, the current Trident base operating system.

On the other hand, it’s sad that the project will leave the BSD fold after so many years. There was a lot of angst in the Telegram channel, and some on various IRC channels. Some people are mad, some are sad, and some feel had - they just migrated from Linux to BSD and the project is turning around and heading back the other way.

I’ve spent too many years using BSD to give it up, so I’m returning to the DIY path that almost everyone who has ever tried to put a GUI on FreeBSD remembers- those painful years of manual X Window configuration, graphics drivers, screens, window managers, and getting applications to run all while not destroying your CRT monitor with the wrong mode settings. Welcome back to the 1990’s. But, well… let’s just get on with it.

Below, I’ve detailed the steps I’ve taken to set up my own desktop on stock FreeBSD 12 - currently at 12.1-RC2.

Note: while these steps work for me, they may not work for you. Your hardware and drivers might be different. I can’t troubleshoot your hardware or your X configuration, so please use this overview as a guide, not a foolproof installation manual.

My general plan is to use:

The applications that I normally have on my desktop include:

and a few more. If I can get these installed and functional, that will be enough for now.

Here are the steps I’ve taken so far:

This file will be transferred over to the new system once it’s up and running.

These packages weigh in at about 4GB. You can skip the fvwm-crystal, lxde-meta, qemu, and virtualbox* packages, install them later, or not at all- it’s up to you.

This should place all the files from the Trident system in the correct place on the new system. Note that at this point, you have all the packages installed, and the system files ready to go. Time for a reboot, to get all the kernel modules loaded including the graphics driver:

Keep an eye out for any errors at this step and fix anything that looks wrong.

There is no ampersand after twm. You want the window manager to run until you exit it, which will return you to the console.

If all goes well, you should see something like the figures below: 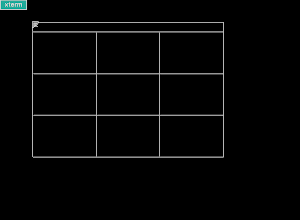 You will have to insert sddm_enable=“YES”, and in some cases dbus_enable=“YES”, in /etc/rc.conf. The session manager should work on a reboot.

That’s about it for now. I’m sure I’ll be updating this post in the future, making some additions and corrections. Check back here occasionally if you think it might help you.

If you spot a mistake or have a suggestion, toss me a note. Check the Contact tab above for my email address. – Jim B.

If you are having problems removing the “red exclamation mark” on your icons (see image above), read on.

The “desktop” in the LXQT desktop is really an instance of the pcmanfm-qt filemanager, spread across the entire visible display window. It has a --desktop option that causes it to be the default manager of icons on the desktop.

The problem (feature†) is that the pcmanfm-qt program considers any icon on the desktop to be “untrusted” by default, and it arranges for that icon to be displayed with the red exclamation mark overlaid. These can also be seen if you start pcmanfm-qt up yourself (“Menu->Accessories->PCMANFM-Qt File Manager”) and open the “Desktop” folder.

To fix this condition, two things must be done-

It’s important to get the order correct because if you don’t, the red exclamation marks show up again after a reboot which may cause you to start losing hair.

Here’s the procedure I followed.

which puts all the command output to /dev/null.

Turns out, LXDE is a bit more trouble that it’s worth, so I’m opting for XFCE instead. It’s a mature desktop, actively maintained, with a number of really good features. Check the documentaion at https://www.xfce.org

No more updates on this page.